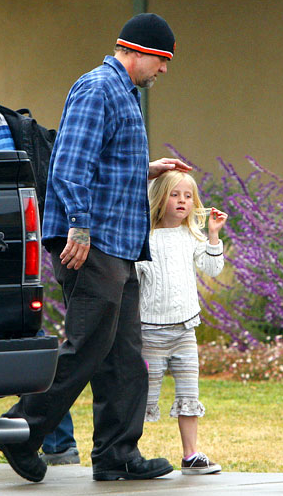 Jesse James and Janine Lindemulder have a 7-year-old daughter, Sunny together and on Monday, Jesse was awarded sole custody of her after a long, nasty battle.

“If she decides not to move to Texas, she gets one weekend a month basically, with no overnights, but a total of 8 to 10 hours of monitored visitation in Texas with Sunny.”

VIDEO: Kat Von D Gets Jesse James’ Face Inked On Her Side

But if she were to move closer to them, she’d have to have a complete rehab stint first.

“Jesse is very pleased with this decision.  He feels that all along, he’s been saying what Janine needs is inpatient treatment, and until she faces up to to her own issues and problems, she’ll never be able to have a good relationship with her daughter. He feels totally vindicated with what the court has decided.  This is great news compared to some of the other news he’s had this week.”

Well, I personally can’t stand Jesse James, but I know that he is a much better parent than Janine, so this is good news.