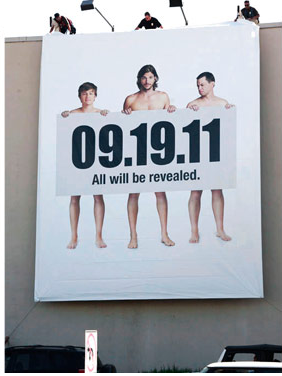 Okay…. Charlie Sheen aka Charlie Harper on Two and a Half Men dies a gruesome death…. via the subway.  TMZ of course got the connection after Friday’s taping of the season premiere, starring Ashton Kutcher.  We already knew that it was Charlie’s funeral, but now we know he got macked by a subway.

Harper married Rose,  the neighbor/stalker he flew to Paris with last season — but things went downhill quickly when she found him in the shower with another woman.  In the episode, we’re told Rose speaks at the funeral and recounts what happened to Charlie … saying the day after the shower incident she and Charlie were waiting for a Paris subway when Charlie “slipped” and the subway literally blew him apart in a “meat explosion.”

Wow, that is one way to go… right?  I think there was a bit of a personal vendetta for Chuck Lorre.  What do you think?