Does Kate Middleton Have An Eating Disorder? 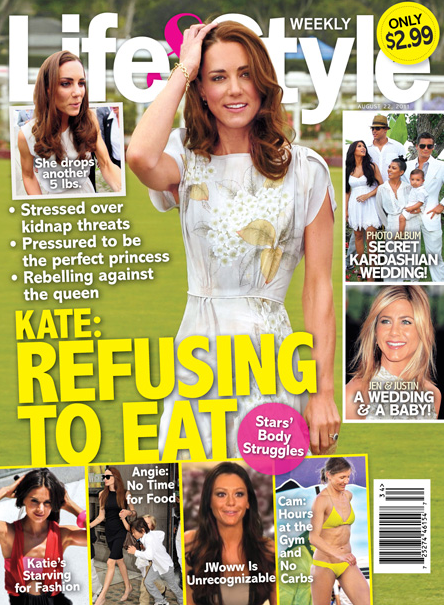 Kate Middleton is at the center of some fresh, kind of sad rumors that I am having a hard time disagreeing with.  Yes, she did look very slim on her big Royal Wedding day.  But since then, she’s become gaunt looking.  I am apparently not the only one to notice either.

She’s allegedly become obsessed with being thin and keeps dropping the pounds.  Sources have revealed that,

“She dropped two dress sizes before the wedding and loved how it made her feel.  She’s showing no signs of slowing down now, and the weight is just falling off of her.”

“Friends are always trying to get Kate to eat something when they see her, but she just ignores them and refuses.  She changes the conversation and makes an excuse like she’s eaten already or that she’s not hungry.”

Her sister Pippa has been calling her at least five times a day to check on her and even William is starting to worry,

“William is concerned.  He doesn’t want to see Kate get sick.”

And what really doesn’t make sense is that others have been saying how much she and William want to have a baby… like now.  So why would you start starving yourself?  That’s almost like a guarantee that you won’t get pregnant.

What do you guys think?  Drop your thoughts in the box below: