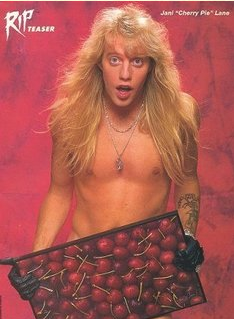 Former lead singer of the rock band, Warrant, Jani Lane (John Kennedy Oswald) was found dead in his hotel room last night.  Lane’s body was found in the Comfort Inn hotel in Woodland Hills, CA.  He was only 47 years old.  So far, there has been no cause of death released.

The police haven’t officially ruled out anything.

Jani Lane’s most famous hit song is Cherry Pie.  You can watch the official music video below…..

UPDATE: Police are reporting that they found prescription pills and a half bottle of vodka in Lane’s hotel room.  They are now treating this as a possible overdose or even natural causes.  We will keep you posted.