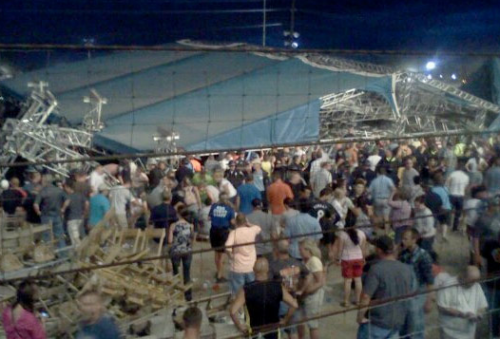 Last night at the Indiana State Fair, Sugarland was getting ready to take the stage and perform for a large crowd when the wind picked up the stage and then threw it down into the crowd, killing five people and injuring 40 others.

A reporter for WANE-TV in Indiana was there and said,

“The wind just picked up and the stage just caught and the roof just caught and it went up like a sail and then it crashed forward into the people standing in the front. There were people trapped underneath and everyone was running and screaming. They were asking any medics or nurses not to leave.”

“We’re all right.  We are praying for our fans, and the people of Indianapolis. We hope you’ll join us. They need your strength.”

Out thoughts and prayers are with the family of those lost and those still recovering.

I smell a really big lawsuit coming… this could be the end of the Indiana State Fair. I am also feeling horrible for Sugarland. You know this has to be so hard for them. It was their fans there, in the front waiting to see THEM when they lost their lives. It’s such a horribel tragedy.
Continue Reading