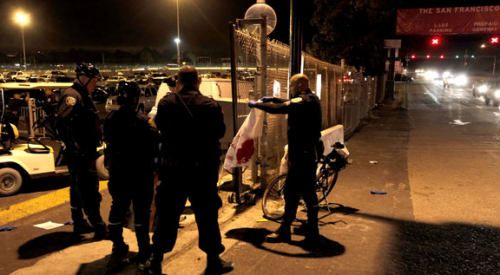 The San Francisco police department is conducting an investigation following last night’s NFL preseason game between the 49ers and Raiders.

One fan that was wearing a shirt, ripping on the Raiders was shot four times in the stomach after the game at Candlestick Park in the parking lot.  Cops were able to detain one suspect for that one.

Then there was a shooting in another lot of the parking area.  The cops are trying to figure out if the two shootings were at all connected.

“We are treating it as separate shootings, but we believe they are related.”

Then to top it off, during the fourth quarter of the game, a fan was severely beaten in the bathroom and is currently in critical condition.

The 49ers have released a statement regarding the incidents,

“The San Francisco Police Department is investigating a shooting incident following Saturday’s NFL game between the San Francisco 49ers and Oakland Raiders outside Candlestick Park. No other information regarding the incident is available from the 49ers at this time.”

You know what?  The 49ers had better beef up their security big time.  They are going to have to convince fans that it is SAFE to attend games, otherwise….. this won’t be the last time we read these horrific headlines.  Hello!  This was a PREseason game.