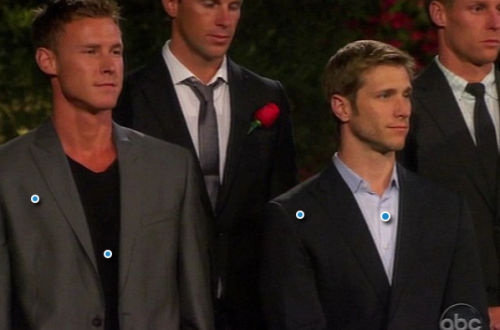 Oh my goodness.  Last night was a very, “interesting” and FULL episode of Bachelor Pad 2.  I wasn’t bored for a minute!  The synchronized swimming competition was hilarious.  The guys were SO impressive and well, the ladies were a total train wreck.  I couldn’t stop laughing at how bad they were!  Ha!

Did you love how bad of a loser Vienna is?  She can’t handle anything!  I think she and Rachel from Big Brother would be a really good match.  Drama.

Then how about Vienna being all sweet to Jake in the kitchen and seeming very genuine…..so her “I’m terrified of that man..” crap is simply that.  Crap.   So Kasey flipping out on her and that whole knock down, drag out fight was seriously annoying.  They are SO wrong for each other.  Kasey’s voice and Vienna’s eyes… OMG.  Their personalities are so conflicting.  It’s all wrong.  Then him giving her the “promise” ring and singing that horrible song at the end of the episode.  how can he not realize that he can’t speak well much less sing.  Isn’t there a surgery for that?   I can’t take the guy seriously!

I am with the majority of the house.  Kasey and Vienna running the show is getting really old and I wish that the power would shift already.  In true reality TV fashion, they tried to end the episode on a cliff hanging note.  The last name you hear Chris Harrison say for the final rose at the rose ceremony was “Kasey.”  So we would assume that means that Kasey got the rose.  So why end it like that?  Is there something more to it?  Was Chris pulling a Ryan Seacrest and finished the sentence with….”you are going home tonight.” ??  This is obviously what ABC wants.  They want us talking and it’s working.

Who do you think went home?  Kasey or Jake?  Jake looks like the more obvious answer, right?

Who do HOPE went home?  Are you as sick of the Vienna/Kasey control as I am?