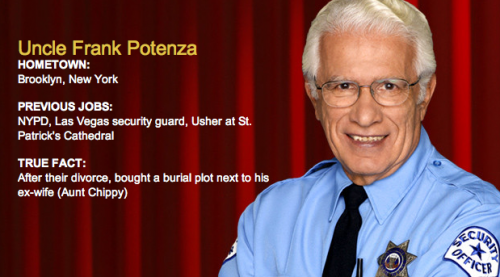 Jimmy Kimmel’s Uncle Frank, who was a New York City police officer for 20 years has died at the age of 77.  We got to know Frank on Kimmel’s late night show and he was quite the character.

Here is Frank’s bio from the show:

Frank Potenza really is Jimmy Kimmel’s Uncle Frank. He’s more than qualified for his job as Security Guard on his nephew’s show, having spent twenty years as a New York City police officer, ten years as a private security officer in Las Vegas (including a stint as Frank Sinatra’s personal security guard at Caesars Palace) and another seven as an usher in Manhattan’s world-famous St. Patrick’s Cathedral. Though, in his two decades as a cop, Frank made only six arrests—including one where the culprit literally ran right into him while fleeing a robbery. Jimmy also likes to stump Frank by asking him to name more than two Sinatra songs.

Married to Jimmy’s Aunt Chippy for 28 years, and now divorced, Frank likes cake and ice cream, walking, and spending time with his family including his three daughters. He considers himself “smart about some things but not others” and also boasts that he is “very spiritual.”

They haven’t released Frank’s cause of death yet.