WEIRD: Trace Cyrus & Brenda Song Are Having a Baby 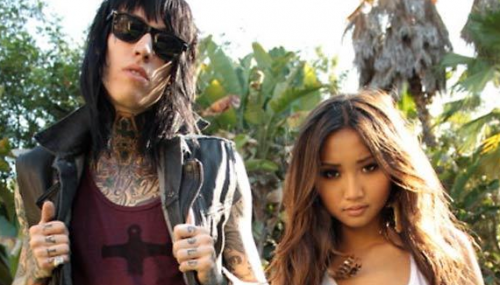 We will call this the oddity of the summer.  Miley Cyrus‘ big brother Trace Cyrus (22) and his Disney Star girlfriend, Brenda Song (23) are having a baby.  Whaaaa?  Yeah.  Me too.  This is too weird.  This was not planned.  She’s only 8 weeks along and they are announcing it?  Why?  Even married couples that plan a pregnancy usually don’t make an announcement until the first trimester is over.  This is odd.

These two have only been dating since early spring and have been turning heads ever since.  One source told Us,

“Trace has known Brenda through Miley for years but they were always friends.  It was not expected.  They were both startled to find out she’s pregnant…They are figuring out how to handle it.”

They are currently living together in Trace’s apartment.

I know that there even more ‘odd couples’ out there.  I just really don’t get this one.  I wonder what Miley thinks?