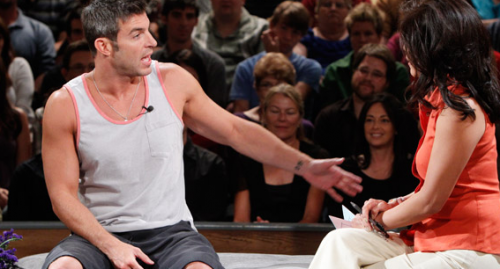 I was so looking forward to watching last night’s episode of Big Brother 13.  I of course keep up to date with the Big Brother After Dark feeds, so I knew that Danielle was going to be sent packing courtesy of Big Jeff.  But I was super excited to see who would get the boot next.

What the episode didn’t show us, was the major blowup that happened between Jeff and Shelly because she flipped on Jeff and Jordan.  Thanks to Dani, she switched sides and decided to take out Jeff and Jordan.  Um, that’s normal game play.  EXCEPT when you have spent 55 days brown nosing and committing your undying love and loyalty to someone.  Shelly did nothing but “love on” Jeff and Jordan only to flip and stab them in the back.

I was already annoyed by Shelly and her menopausal emotions.  But I lost all respect for her as a human being after watching her do that to her “friends”.  She VOTED OUT Jeff.  During the double elimination, she had the chance to redeem herself and vote to keep him.  But no.  She’s a lying, back stabbing wench and she’s got a truckload of BAD karma headed her way.

I’d also like to note that her husband and daughter have got to be SO disappointed in her.  She’s dug her own grave and now has to live with the horrible reputation she’s built for herself.

On another note, I thought that Big Jeff was so adorable all fired up when he was being interviewed by Julie Chen.  I felt so bad for Jordan.  After the show concluded and the After Dark feed began, she and Rachel had to pack up all of Jeff’s stuff since he didn’t get a chance to do so.  At one point Jordan said, “I’m gonna pack this bottle of wine for him, I know he’s gonna get drunk tonight at the hotel.”  How cute is that?

Rachel was just as upset as Jordan.  They both cried their eyes out.

Things aren’t looking good for them either.  Their only hope is winning HOH.  Adam looks like he’s going to side with Kalia, Porsche, and Shelly.  So Jordan and Rachel are going to have to fight for their lives till the end.

I am truly hoping that this doesn’t end with a final three of people I cannot stand.  It’s happened before and I would hate to see that happen again.