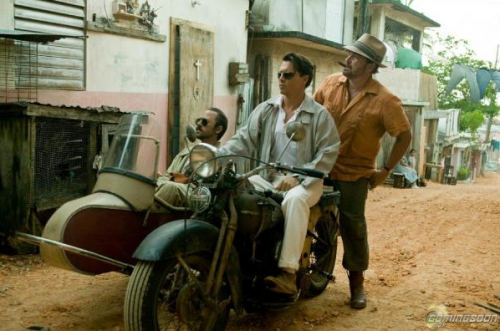 Oh heck yes!  It’s time for a delicious dose of the one and only, Johnny Depp!  Oh how I love this man.  Everything he touches is GOLD.  We’ve got the first trailer for his latest flick, The Rum Diary.

Based on the debut novel by Hunter S. Thompson which initiated his long, distinguished and brilliantly unpredictable career, “The Rum Diary” tells the increasingly unhinged story of itinerant journalist Paul Kemp (Depp). Tiring of the noise and madness of New York and the crushing conventions of late Eisenhower-era America, Kemp travels to the pristine island of Puerto Rico to write for a local San Juan newspaper, the San Juan Star, run by downtrodden editor Lotterman (Jenkins). Adopting the rum-soaked life of the late ’50s version of Hemingway’s “The Lost Generation,” Paul soon becomes increasingly obsessed with Chenault (Heard), the wildly attractive Connecticut-born fiancee of Sanderson (Eckhart), a businessman involved in shady property development deals.

The Rum Diary is set for limited release on October 28th. I cannot WAIT!!