Javaris Crittenton Has Been Arrested in Orange County 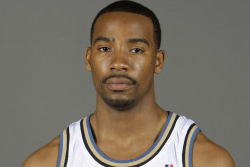 As we had previously reported, former NBA – Washington Wizards player, Javaris Crittenton murdered a 22-year-old mother of three, Julian Jones.  He then fled and has been running from the police/FBI ever since.

Well, last night he attempted to board a plane in Orange County, CA when authorities took him into custody.  Of course his lawyer says that Crittenton was trying to fly back to Atlanta to turn himself in for the murder.  Um, why do you tink that is okay, like it would work.  You are a fugitive and you think you can FLY without being arrested.  What a tool.

Anyhow, this guy is going to face a very long prison sentence… if not the death penalty.  The victim’s family is going to want him put away forever.

I am glad they got fairly quickly anyhow.  He wasn’t able to flee the country.