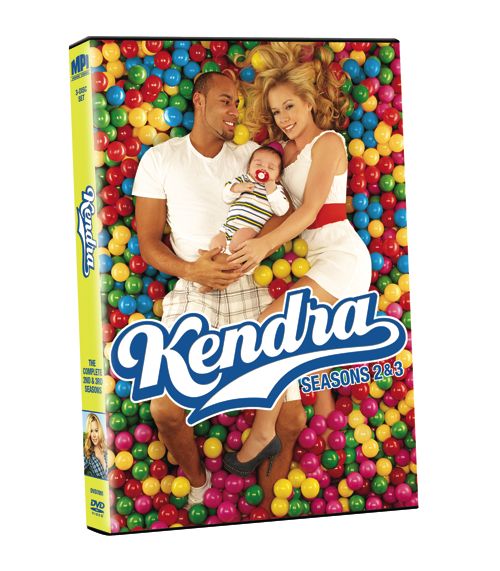 Hey Kendra fans!  As we get ready to embark on the fourth season of Kendra Wilkinson’s show, Kendra we are hooking you up with the first three seasons on DVD!   So what’s in store for this new season in Kendra and Hank’s life?

It’s time for Kendra to put down roots at last when E!’s eponymous series returns for its fourth season premiere.  The Baskett family — Kendra, husband Hank and Little Hank– finally “slide into home” in their new LA digs following years of cross-country moves.  Doing so puts Kendra right back where the action is and positions her perfectly for her Hollywood career ambitions.  Of course, this will challenge Kendra and Hank to find just the right balance between the personal and the professional.

Following a successful but intense run on “Dancing with the Stars,” Kendra is busily writing her second book and the Basketts are considering another baby.  But even as Kendra’s work life is busier than ever, Hank’s football career seems to be on very shaky ground — which makes long-term planning for the celebrity couple both stressful and uncertain.   But rolling with life’s punches is what Kendra is known for, and the Basketts are more than used to dealing with unexpected challenges thrown their way.  Together, the Basketts will emerge stronger and even more committed to one another as family always remains their top priority.

The season kicks off with a hilarious encounter with Kendra and Hank’s quirky new neighbors, who play an over-the-top practical joke on the neighborhood’s newest residents. Kendra’s decision-making skills are put to the ultimate test by all the decorating choices she needs to make for the new home.  Meanwhile, a confrontation with Kendra’s agent flares up after paparazzi photograph Kendra outside a high-end Beverly Hills restaurant — in basketball shorts and flip-flops.  When the agent demands that Kendra “step up her game” and live up to the expectations of a celebrity lifestyle, Kendra gets defensive.  She suggests that the agency focus less on what Kendra’s wearing and more on finding Hank some work — given that he hasn’t yet found a spot on an NFL team.

Catch the season 4 premiere of Kendra on E! at 11pm on September 25th.

Now to enter to win Kendra seasons 1-3, send your name and address to HollywoodHiccups [at] gmail.com , we will pick a winner at random on Tuesday, September 6th!  Good luck and enjoy this season with Kendra, Hank, and Hank Jr.!