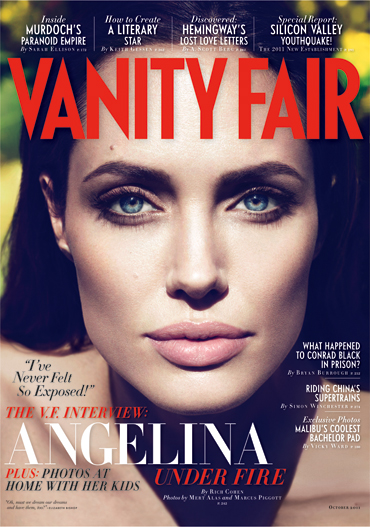 Angelina Jolie is the FACE of this new issue of Vanity Fair for their September 2011 issue.  As you can see, it’s all about her FACE for the cover.  She opened up to the magazine about her upcoming film, In The Land of Blood and Honey, which is her directorial debut as well as screenwriting debut.  This film is all Jolie.  She wrote it, she directed it.  Jolie went all out for this one.  I am very curious to see how the American critics react to it.  So far, it seems that she’s got the support of the Bosnian people.  It is all about them and they are good with what she’s done.

“I’ve never felt more exposed. My whole career, I’ve hidden behind other people’s words.  Now it’s me talking. You feel ridiculous when you get something wrong.”

So how did the script come to her?

“I had the flu.  I had to be quarantined from the children for two days. I was in the attic of a house in France. I was isolated, pacing. I don’t watch TV and I wasn’t reading anything. So I started writing. I went from the beginning to the end. I didn’t know any other way.” She says she then let Brad take the script to read on a trip: “He called and said, ‘You know, honey, it’s not that bad.’”

On a side note, Jolie made sure to address all the rumors about her personal life:

“I’m not pregnant. I’m not adopting at the moment.”  and “there is no secret wedding.”

You can pick up Vanity Fair on stands September 1st.