Who Is Willing To Pay $30 Million For Kim Kardashian Sex Tape?! 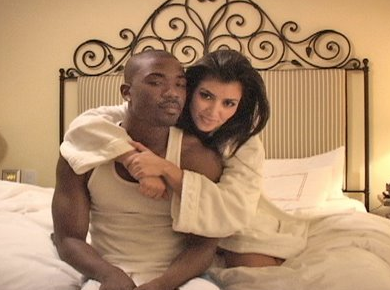 Kim Kardashian has made two very terrible choices in her life.  Both of them are on video.  The first would be her sex tape with Ray J and the second is her newly released music video.  I don’t see anyone forking over big bucks to get the music video to disappear, but, someone is definitely trying to get her sex tape removed. Sure, it’s already out there, so it won’t disappear, but it would no longer be available and somehow that would make her feel better.

There is a mystery buyer who is going to have to come up with at least $30 million.  Vivid Entertainment’s Steve Hirsch told TMZ,

“Based on its long term value, it looks like $30 million would be a starting point for a discussion on all of the rights.  I have no idea who is behind this offer … but If it’s Kim, I have a tremendous amount of respect for her. She has my number and can call me any time.”

There are rumors about who this mystery buyer is.  Who do you think it could be?  Some think that it’s Kim’s new hubby, Kris Humphries.  I think that it is Kim… or the combination of the entire Kardashian family pitching in.  I wonder if her mom, Kris Jenner is opposed to the sex tape coming down.  Does she want it to stay up as part of their brand?  I am not kidding.  I mean, this is where Kim’s fame began and Kris Jenner is twisted enough to want it to stay in place.  She cares more about their “brand” than being a protective mom.  Kind of creepy really.