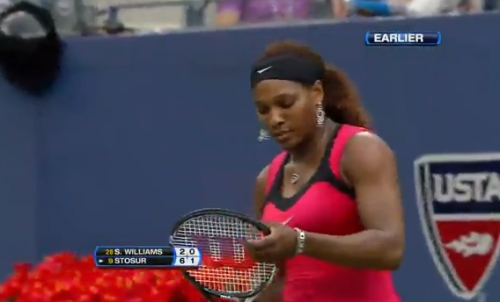 Serena Williams threw all of her class and respect out the window yesterday during the US Open when she went off on the referee for a call she didn’t like.  Williams has been cited for verbal abuse and is now in the middle of an investigation that could get her banned from all future tournaments.

Williams lost to Samantha Stosur and well, she showed what a sore loser she can be.

The Tournament Grand Slam Committee is looking over all of the evidence and will make a decision on how to deal with Serena.

Watch the video…. the “worst” part is in the last 20 seconds…. but watch the whole thing…. it’s rather shocking.

“If you ever see me walking down the hall, look the other way because you’re out of control. You’re a hater and you’re unattractive inside. Who would do such a thing? Wow.”

And she didn’t stop there!  She went so ghetto with that, disrespecting the judge.  What a fool.  And the fact the Williams was essentially cheating by yelling like that, trying to make Stosur mess up… wow.   Did you notice the look on her sister Venus’ face…. you can tell she’s embarrassed by her actions.