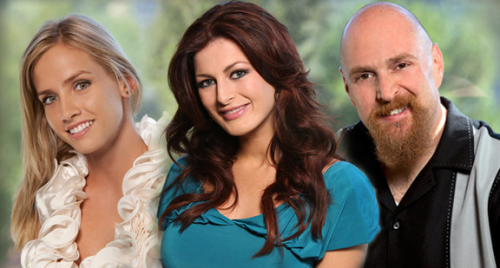 This summer has been fully loaded with Big Brother 13, but all good things have to come to an end and that is what we are getting tonight…. the finale of Big Brother 13!  The finale three cam down to Porsche, Adam, and Rachel.  In last actual episode, we were left with the three of them in that mixer thing loaded with “butter”….. if you watch the live feeds, you know a lot more, if not… you’re not even sure who won that part of the three part HOH competition.  Rachel won that first competition and then Porsche and Adam faced off for round two… she won!  So, Adam is not sitting pretty right now.

Tonight the winner will be crowned and we will have that posted as soon as the votes are in!

One piece of good news…. Big Brother has been renewed for a 14th season for 2012!  Not that I actually believed that there wouldn’t be another season, but it’s always nice to have it set in stone.

Keep checking back for the WINNER of Big Brother 13!  And while you’re waiting, drop your predictions in the comments below……

UPDATE: Rachel won the final HOH with a score of two while Porsche couldn’t get a single answer correct.  It was kind of comical…. Then Rachel voted out Adam and took Porsche to the final two.  After a wild night of jab, drama, and emotion amongst the jury, they voted Rachel as the WINNER of BIG BROTHER 13!!!!!  Yay!!! They got it right and I couldn’t be happier.