UPDATED! Real Housewives of D.C. – Michaele Salahi Has Been Abducted?! 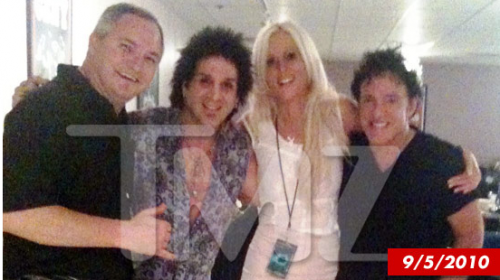 Real Housewives of D.C. star Tareq Salahi is claiming that his wife Michaele Salahi has been abducted.  Yeah, this is a weird.  Tareq last saw his wife yesterday when she left their house to go get her hair done.  Problem is, she never made it to her appointment.  Tareq then told TMZ that he got a call from her last night, from an Oregon number he didn’t know and she said that she was going to her mom’s house with is down the road from their house.  He called her mom to confirm, and she knew nothing about it.  So that’s when he called the sheriff’s department who told him that Michaele had already called them!  Whaaaa?!  She apparently told them she was fine and dealing with family issues.  Tareq  isn’t buying it.  They have been getting death threats and he believes she was forced to make those calls.

So he’s now reaching out to the public to help him find his wife.

“We are reaching to the public pleaing [sic] desperately for your help.  It is our belief as of last night, that Michaele Salahi may have been kidnapped or abducted and being held under duress and forced to tell persons, including authorities she is okay.  We are asking the public to please be on the look out for her, and if found please contact the authorities and please approach her and contact the authorities to intervene and that she may be forced to say she is okay, when in fact she is not and being held under possible abduction.   The Salahi family can be reached at 540-635-9933.”

So anyone from Virginia… or I guess anywhere…. if you see Michaele, please call the number above and help the fella out.

But I gotta ask… you don’t think this is a sick ploy for attention do you?  I mean this is the White House Party Crashers we are talking about.  They will do just about anything for attention…..

UPDATE:  Michaele Salahi was NOT abducted!  She ran off with Neal Schon, the lead guitarist for the band Journey and is still with him currently in Memphis, TN where the band will be performing tonight.  Um, Tareq, get a grip..