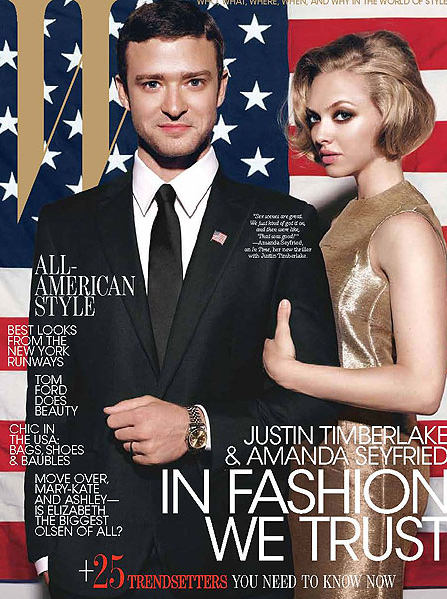 Justin TImberlake and Amanda Seyfried are making a bold statement in the October issue of W magazine.  Playing on a political sex scandal, this duo rocks the photo shoot like only they could.  They are of course promoting their movie In Time….

Amanda talked about her role to the mag:

Amanda, in In Time, your character, a rich girl, is kidnapped by Justin Timberlake’s character.
Amanda Seyfried: It’s set in the future, where money buys you time. My character falls in love with Justin’s character—she wants to give him all the time he needs so he can save the world. It’s very romantic. No matter what’s happening in my life, I can always get lost in the romances of my characters.

And what about sex scenes?
Sex scenes are great. A lot of my costars have been sexy guys my age, and so, why not? I’m not going to pretend it’s not fun. Justin was great—he had come from doing Friends With Benefits, where he basically had sex every day at work—and so it was easy for both of us. We just kind of got it on, and then were like, “That was good!”

You’re 25. Did you dance to any songs by ’N Sync at your prom?
I went to four different proms in high school. I was addicted to the whole ballroom thing. But it was embarrassing to be an ’N Sync fan in high school. I was into them in middle school. I definitely danced in my friend’s basement for hours and hours to ’N Sync’s first album.

Grab a copy of W to read the full article including Justin’s take on his career thus far and how SNL has had a great influence on his success.