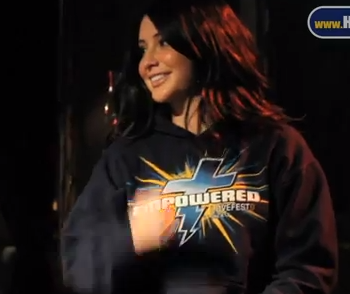 Last night Bristol Palin was at the Saddle Ranch on the Sunset Strip filming her reality show when she decided to ride the mechanical bull.  She actually lasted quite awhile!  Anyhow, when she fell off, some spineless guys started verbally attacking her saying things like:

Bristol confronted the guys that were spewing the horrible attacks and wanted to get one example of why her mom was a whore or a liar.  She asked if he hated her mom because he’s homosexual.  And he said, “pretty much.”  Whaaaa?!  Seriously?  You hate Sarah Palin because you’re gay and that gives you the right to attack her daughter in a public place?

That guy is a disgusting human.  Who does that?  Who says those kinds of things to an innocent woman?  Bristol hasn’t done a thing to him, yet he feels he has the right to say that stuff?  Karma is a B*TCH.

Watch it all go down in the video below…. very NSFW language: