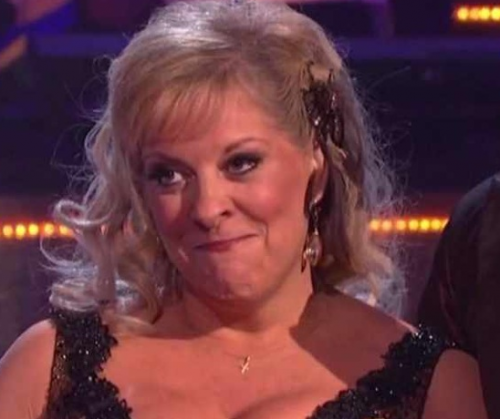 **Scroll down for videos**

Last night was the second round of competitive dancing on this season of Dancing With The Stars.  Last week we sent home Metta World Peace.  So who will it be this week?  Let’s take a look at how the stars stacked up last night:

Hope Solo came out to kick off the night with a Jive and I personally enjoyed it.  The judges weren’t overly critical, but yeah… she still has some work to do… she’s just hugely challenged by her athletic ability.  Bottom line, more time in the studio and off of the soccer field.  Scores: 6, 7, 6 = 19

Kristin Cavallari was out next ricking the Quickstep.  I am in her corner all the way.  She sparkled, she had the energy, all around, it was a great performance that ended up getting her into third place on the leader board.  Scores: 8, 7, 7 = 22

David Arquette is one of my faves but I am afraid the judges aren’t going to get on his wagon and appreciate him for who he is and will be leaving us sooner than later.  Totally sucks too because I adore Kym Johnson!  They did the Jive and had fun, but technically, it was lacking.  A lot.  Scores: 6, 6, 6 = 18

Elisabetta Canalis is gorgeous, but OMG.  She looks like a stiff stick figure on the dance floor.  She has got to loosen up and get INTO it if she has any chance of getting past this week or perhaps the next.  The Quickstep will not be her strong suit, that is for sure.  Scores:  7, 7, 7 = 21

Rob Kardashian showed his insecurities before hitting the dance floor, revealing he has weight issues and well, he is showing us his cute side, outside the Kardashian box.  Cheryl Burke is so supportive and well, I think these two are going to grow on me, quickly this season.  Sure, Rob looked a bit dorky doing the Jive, but in a totally endearing way.  I’m cheering for him!  Scores: 7, 7, 7 = 21

Carson Kressley and his quirky self came back again for a Quickstep that left the judges less then impressed, again.  Sure, he’s fun.  But he is going to have to work on the technical stuff this week if he wants to last.  Scores: 6, 6, 6 = 18

Ricki Lake came out firing.  She has huge goals for herself this season and she’s not holding back.  She wants the Mirror Ball Trophy, a hot bod, and all the confidence in the world when this is over.  Can she do it?  Yes, if she keeps it up like she did last night doing the Jive.  She and Derek Hough landed on TOP of the leader board and have a great chemistry… this girl is on fire! Scores: 8, 7, 8 = 23

Chaz Bono actually annoyed me last night.  Am I being less than sympathetic?  Yes.  But you know what, playing the hurt card this early without an actual injury is weak.  Chaz is overweight and that’s the problem with the knees.  You have to expect that kind of pain coming into a dancing competition.  Bottom line, the Quickstep was a disaster at the pace of a snail.  There is NO way he’s going to last through this competition if this is the result on week two.  I say he should be going home since there is NO hope of winning.  It’s only going to get worse/harder, physically.  Scores: 6, 5, 6 = 17 (Worst scores of the night.)

Chynna Phillips was on top of the leader board last week and she showed up with a great Jive this week.  She’s got the spunk and spirit to take her far.  Scores: 7, 7, 7 = 21

Nancy Grace did a great Quickstep but unfortunately her performance was overshadowed by her nip slip moment.  Still she’s doing so much better than her critics have given her credit for.  You go girl!  And yeah, get those knockers under control!  Scores: 6, 8, 7 = 21

J.R. Martinez and Karina Smirnoff did the Jive and their’s was my favorite performance of the night.  The energy, the fun, the whole package…. they brought it all.  They are tied for second place on the leader board and I expect to see them on top next week.  Scores: 7, 7, 8 = 22

Any thoughts of your own?  Drop them in the comments below!

BEST Dance of the night… J.R. and Karina