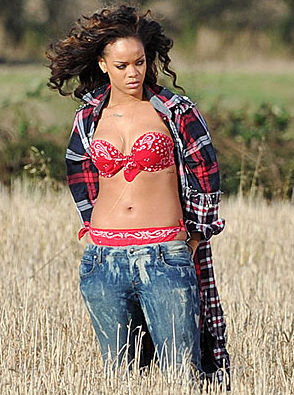 Rihanna was shooting her latest video on a farm in Ireland for her single, We Found Love and it didn’t go over so well. The farmer who owns the land was very offended by her skanky outfits and made them leave.

“I thought it was inappropriate. I requested them to stop and they did. I had my conversation with Rihanna and I hope she understands where I’m coming from. We shook hands. From my point of view, it was my land, I have an ethos and I felt it was inappropriate. I wish no ill will against Rihanna and her friends. Perhaps they could acquaint themselves with a greater God.”

Maybe he should have Googled RiRi before he gave permission to film on his land in the first place.  She’s always in something racy.

No worries fans… she’s still going to be releasing her sixth album on November 21st.  Will you be buying it?