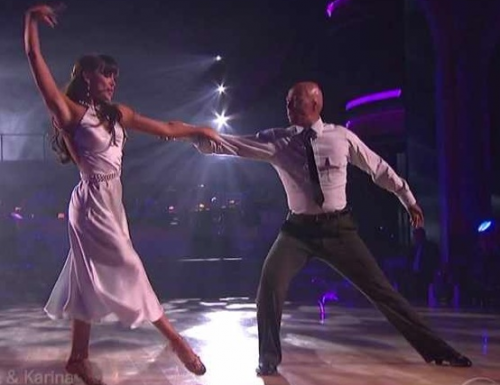 Last night on Dancing With The Stars, the celebs chose songs from their most memorable years in their lives for my favorite episode of the season, Dancing From The Heart.

This episode always has me crying through just about every dance.  This is the part where we get a glimpse into the hearts and personal lives of the celebs that we never saw before.

Rob Kardashian dedicated his Foxtrot to his late father, Robert Kardashian Sr. whom he lost when he was just 15.  Rob’s song choice was Frank Sinatra’s Fly Me To The Moon.  It was by far my favorite dance from Rob so far.  He looked amazing.  His dancing skills came up to a whole new level this week and I can’t wait to see what he does next. Scores: 8, 8, 8 = 24

Chynna Phillips was once again a judges favorite this week and I am still not feeling it!  She chose her own song, Hold On from 1990 to dance her Rumba to.  I felt like it was a very stiff dance, all choppy and well, I really didn’t like it!  Scores: 8, 9, 9 = 26

Chaz Bono should be going home tonight after last night’s Rumba.  He chose Laugh At Me by his father, Sonny Bono.  Chaz didn’t dance las tnight.  He just stood there while Lacey Schwimmer danced around him.  It was awful.  If he doesn’t go tonight, this show is rigged. Scores: 6, 6, 6 = 18

Carson Kressley chose It’s My Life by No Doubt to reflect where he’s at now after a life (childhood) of feeling trapped for being gay.  Being the dorkiest kid in school, etc.  His Tango was great.  He’s been more of a goofball the past two weeks, but last night there was a lot of heart in his performance and it showed.  Scores: 8, 7, 8 = 23

J.R. Martinez was once again my favorite dance of the night and I think most of the world would agree.  His Rumba was dedicated to all of the fallen soldiers who haven’t made it home like he did.  He chose Tim McGraw’s IF You’re Reading This and yeah, I was bawling along with the audience and judges.  So, so touching and the dance skills were amazing on top of it.  I’ve never seen such an emotional dance in my life.  Scores: 9, 8, 9 = 26

Nancy Grace dedicated her Waltz to her twins by choosing the first song she ever sang to them, Moonriver.  It was a magical dance that brought tears to my eyes and you could feel the love and passion in her moves.  Scores: 7, 7, 7 = 21

Ricki Lake got the highest scores with her Rumba. She is one happy girl getting ready to walk down the aisle, so she chose Sara Bareilles’ Gravity.  It was a beautiful dance filled with passion.  I think she was visualizing her fiance on the dance floor with her!  Scores: 9, 9, 9 = 27

Hope Solo brought the sexiest sizzle to the floor with her Cha Cha Cha to Enrique Iglesias’ Tonight.  She definitely brought the heat while she reflected on her huge World Cup loss earlier this year.  Scores: 8, 8, 8 = 24

David Arquette wrapped up the night with a Rumba to Five Stairsteps’ O-o-h Child.  He’s had a rough year and is finally coming back around, healthy and happy.  It was his best dance by far.  Filled with his heart, his love for his daughter Coco and passion for his second chance at life.  Scores: 8, 8, 8 = 24

Overall, another great night on DWTS.  Who will be going home tonight? Well, you know what I think about that.