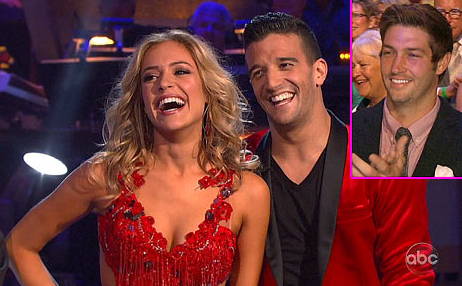 Last night on Dancing With The Stars, Kristin Cavallari channeled her inner Beyonce when she tore up the dance floor with Mark Ballas to the 2004 hit song, Crazy In Love.  Girl was smokin’ HOT!  Little did we know that there was a hidden meaning in this song/routine.  Cavallari’s ex-fiance, Chicago Bears QB, Jay Cutler was in the audience, for the first time this season.

He coldly called off their engagement in July after pooping the question in May.  Poor Kristin had already been posing in wedding gowns for the mags that were published…. her embarrassment and humiliation was huge.

So why on earth would Jay Cutler show up last night to support someone he dumped?  Perhaps because they are back together?

Kristin refused to talk about Jay’s appearance backstage last night.  But I am telling you, wait for it.  She will be flashing that big smile a little brighter when she shows the ring is back on her finger.  Wait for it!

Thoughts?  Sound off below!

UPDATE: Check out the pic below, click to enlarge.. this was taken this morning.  They are DEFINITELY back together!  Yay!