Kristin Cavallari: DWTS is Not a Dancing Competition 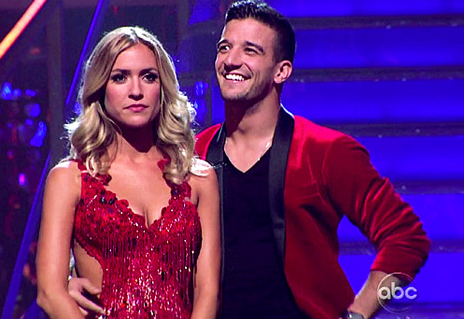 Agreed!  After last night’s SHOCKING elimination on Dancing With The Stars, I am ready to throw in the towel and NOT watch it anymore.  One thing was proven by Kristin Cavallari’s elimination, either the show is fixed because they want the controversial Chaz Bono to stay on board OR it is completely a popularity competition.  If it was about dancing, Chaz would have been gone.

Kristin and her partner, Mark Ballas got 24 out of 30 points for their “Crazy in Love” samba and were in no way deserving of the boot.

After the show, Cavallari spoke with Us saying,

“I’m really sad.  But, I’d rather go out on top and have people be shocked than have people be like, ‘Thank god she’s leaving, it’s about time.’ It was the best experience I’ve ever had. I could not be happier that I did the show.  It is what it is.  That’s the thing with Dancing with the Stars, you never know.  It’s clearly not a dance competition!”

Exactly.  You don’t have to dance.  You can just be a lump and somehow make it week after week.  It’s so wrong.

I think that fans votes should be eliminated completely.  They should leave the judging to the judges, they vote fairly.  America clearly does not.