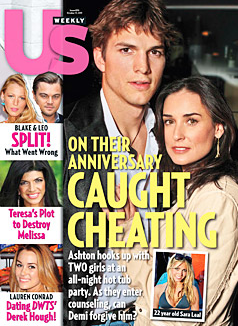 So the entire world ( for the most part) believes that Ashton Kutcher is a cheater and perhaps even a serial one.  Why would he do that when he’s got a sexy cougar like Demi Moore for a wife?  Because he can.  She lets him get away with it, so why not?  Plus, many speculate that they have an “open” marriage.  Eww!

The reports that Ashton cheated on her most recently on their sixth wedding anniversary have gotten even juicier.

After Ashton and his pals were done at Fluxx nightclub, they took the party to his hotel room at the San Diego Hard Rock Hotel where he had a suite.

“He said none of the girls were ‘hot-tub worthy.'”

But, when Ashton met Sara Leal (below) and her friend,

“Ashton told them he was separated from Demi.”

There was a lot of “hard-core” flirting,  and Ashton was “totally into it.  Then, “Within five minutes, they were all naked in the hot tub, making out!”

Um sick.  What is wrong with Demi?  AShton still has not come out and denied ANY of the cheating allegations.  And Demi just keeps him like she’s desperate.  OMG.  They are one embarrassing couple.