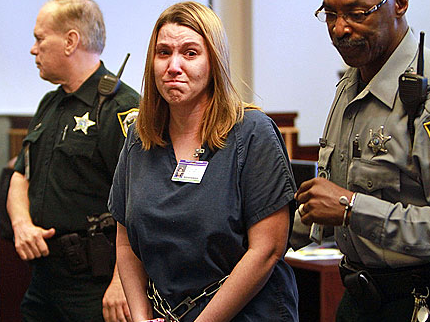 Billy Bob Thornton’s estranged daughter, Amanda Brumfield has been sentenced to 20 years in prison.  The ruling came in yesterday (October 6th).  She was convicted of aggravated manslaughter.

The crime occurred in October of 2008 when she was babysitting her goddaughter, Olivia Madison Garcia, just one year old.

Brumfield tried to say that she fell out of her playpen while climbing out, but the clear evidence proved that was not true and that she brutally murdered the baby.

Olivia mother, Heather Murphy was surprised by the sentencing saying it was “more than I expected.”

Brumfield made one last ditch effort for some sort of redemption saying,

“I miss Olivia just as much as anybody does.”

Really?  I can’t believe she had the nerve to say that.  She thinks she misses her as much as her mommy?  Gag me.

I think that that Casey Anthony and Amanda Brumsfield should be tossed on a desert island and left to rot together forever.

May the sweet baby Olivia rest in peace.