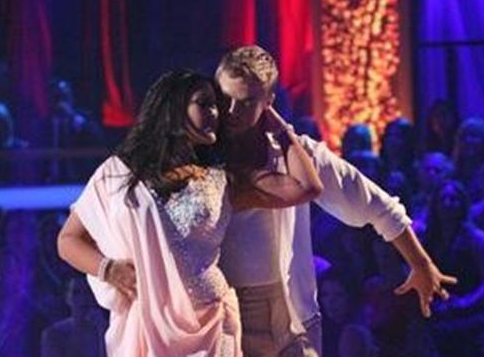 Last night it was hard for me to tune in to Dancing With The Stars.  Why?  Because I am still that pissed off that Kristin Cavallari was booted off the show last week.  She deserves to still be in it and that elimination proved that this show is not about the dancing.  Not until they eliminate the viewer’s votes and go strictly with the judges scores.

But I wouldn’t be doing my job if I didn’t watch the show and bring th recap and scores back to you guys.  So I powered through it.

The theme for the night was Memorable Movie Scores.

Chynna Phillips started the night with a tango with the theme from Mission Impossible and OMG… it was awful.  It was painful to watch.  She was such a wench during rehearsals then when she hit the dance floor, she blanked and looked like an idiot.  I felt Tony.  That was a load of crap.  If she’s not booted tonight, I will be very surprised… about as surprised as I was with the generous scores she got.  Scores: 7, 7, 7 = 21

David Arquette came out for his paso doble to the theme from Raiders of the Lost Ark and he rocked the house.  It was his best dance so far and I loved every second of it.  His bravado was huge and the crowd went nuts, giving him a standing ovation.  I expected some 9s form the judges, but no.  Scores: 8, 7, 8 = 23

Carson Kressley was next with a Viennese waltz to the sounds of Pirates of the Caribbean’s Curse of the Black Pearl.  The costumes were fabulous, the entertainment value was outstanding once again…. but the technical stuff was lacking.  Scores: 7, 6, 7 = 20

Nancy Grace was next out with a paso doble to Flash Gordon.  Her spunk was still there and she brought some extra fire but alas, the judges weren’t fully impressed.  I am getting the feeling they want her out soon.  Scores: 7, 7, 7 = 21

Hope Solo returned to the dance floor after being in the bottom two with Kristin last week and this time she did the foxtrot to the sounds of Toy Story’s You’re Got a Friend.  It was a very fun dance and for the first time, she looked like she was having a good time out there. The judges liked it too.  Scores: 8, 8, 8 = 24

Rob Kardashian came out with a paso doble to the Superman theme and was impressive once again.  The little ripping of the shirt with a sparkly “K” underneath was a tad tacky, but the dance and energy were great.  Scores: 8, 8, 8 = 24

Ricki Lake was ready to quit in rehearsals this week but thank God she didn’t!  Wow.  This girl came out on the floor doing a very difficult tango to the theme for Psycho and blew everyone away.  I really don’t have words for how dang good it was.  But the judges showed it with the first 10s of the season.  Scores: 10, 9, 10 = 29

Chaz Bono who should have been booted last week tried to make a strong comeback last night with a paso doble to the Rocky theme.  Cher was in the crowd and of course was brought to tears, the judges always act so touched by his dances no matter how badly they suck.  Yeah, last night was certainly not his worst.  Maybe his best, but I am still jaded.  Scores: 7, 7, 7 = 21

J.R. Martinez wrapped up the night with a foxtrot to the theme for The Pink Panther.  I was once again blown away by just how good he is.  He’s got such a natural talent.  The judges however didn’t feel like giving him any 10, but still he landed in second place for the night.  Scores: 8, 9, 9 = 26