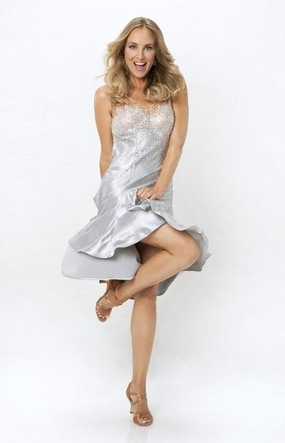 Tonight it’s another elimination on Dancing With The Stars.  Will it be as shocking as last week’s?   I don’t think it’s possible.  After seeing Kristin Cavallari get sent home, I don’t think I can get more disappointed than that.

Last night’s theme was Memorable Movie Scores and we some some pretty great performances.  Ricki Lake certainly stole the show with her Psycho dance.  If you missed out, you can see the dance again and see the scores for all of the stars HERE.

Ricki is atop the leader board again and Carson Kressley is alone at the bottom.  I certainly don’t want to see him go… he’s far too entertaining to lose this early.  Yes, I am still gunning for Chaz Bono because he still isn’t tearing up the dance floor and should have gotten the boot last week.  And if it’s not him, then based on last night, Chynna Phillips should be gone.  She flubbed up badly.

Before the results come in, we will have performances by Susan Boyle, Blake Shelton, and we will get to see two time champ, Julianne Hough rock a Footloose dance with her brother, Derek Hough.  I can’t wait for that part!

So refresh the page for the results.  We will have them up live as soon as they are revealed!

UPDATE: The bottom three were Chynna, Rob, and Nancy…… then it was down to Rob and Chynna….. Then it happened… Chynna was sent home.  I think it was more than her blanking last night.  I think that she sent out bad vibes during the rehearsal video…. she came across really crusty and I don’t think that anyone liked that.  Poor Tony….