VIDEO: Why is Hilary Swank LYING About Ramzan Kadyrov? 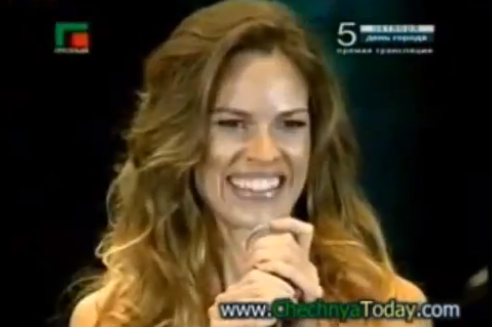 I’ve been a fan of Hilary Swank for ages.  I have always had loads of respect for her as a person and in the Hollywood world.  But, after this, I am not so sure anymore.

Swank has been under fire from human rights groups for attending the birthday party for the President of Chechnya, Ramzan Kadyrov on October 5th.

She immediately claimed that she didn’t know that he’s been accused of torturing and killing his political rivals.

By the way, Jean Claude Van Damme was also in attendance.  No apology from him, yet.

“I deeply regret attending this event. If I had a full understanding of what this event was apparently intended to be, I would never have gone.”

Well, it looks like Swank wasn’t as clueless as she tried to play off.  This video (below) proves that she knew exactly who he was and what she was attending.  She gave a speech and said “happy birthday” to Kadyrov… someone asks her how she knew it was his birthday, she said, “I read, I do my research.”

So what’s with the lying to your fellow Americans?

Check out the video and you be the judge: