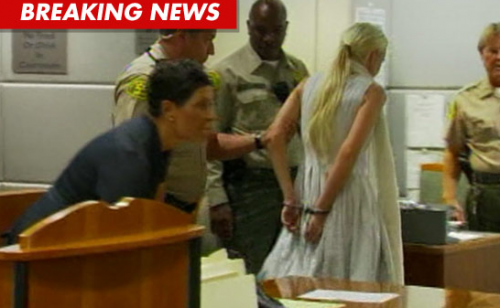 Lindsay Lohan was back in court this morning where Judge Sautner let her have it.  Lohan has been blowing off just about every requirement of her probation and making up every excuse in the book.  The short story: Lindsay had her probation revoked and was removed from the courtroom in handcuffs.  I am assuming that she will be booked, “mug shotted”, and then released.  She will have to complete 16 hours of community service before she appears in court on November 2nd.

She could be sentenced at that point to 1 1/2 years in jail… but there is no chance in hell that she will actually serve that.  Even the judge pointed out that the new laws and the overcrowding will keep her from behind bars.

Thoughts?  Sound off in the comments below!