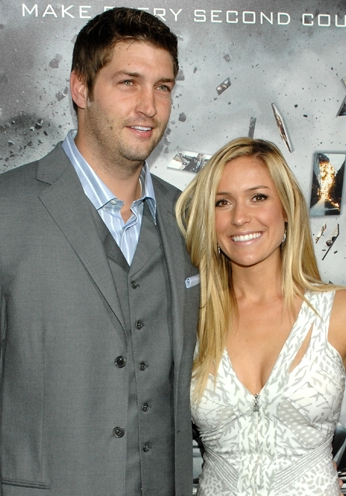 Kristin Cavallari was totally humiliated by Chicago Bears QB, Jay Cutler when he broke off the engagement.  She was heartbroken and embarrassed as the photo shoots of her in wedding gowns came out and she was single.  Later on, as she was owning the dance floor on Dancing With The Stars with Mark Ballas, we see Jay in the audience, cheering her on.  Instant red flag… why is he there?  It was obvious.  They were back together.  And things haven’t slowed down since.  They are seen together all over the place, behaving like nothing ever happened, happy as can be.

So what gives?  What’s going to make it work this time?  First off, there is no ring to be found.  Kristin had returned it to him when he dumped her and it doesn’t’ look like he’s given it back.  Rumors have it that they are taking things slower this time around.   That the reason they failed the first time was because they moved too fast.  That could be true.  They were engaged after just 7 months of a relationship.

Kristin still thinks that Jay is THE ONE for her and is going to be patient in the relationship and wait for their timing to be better before jumping back into an engagement.  But let’s face it.  If their is a second proposal, it’s going to feel like there is an asterisk involved.  Like we won’t believe it till we see the post wedding photos.

So…. if I was them, and the second engagement happens, I wouldn’t sport the ring until after the wedding.  I would plan it secretly, make it a destination wedding.  Keep the paprazzi out of it and invite only your closet friends and family.

How will it all really play out?  Who knows.  I am sure we won’t see much of anything until after the football season is over since Jay really needs to stay focused on the game.