Dancing With The Stars Week 7 – Recap and Scores – Oct. 31st 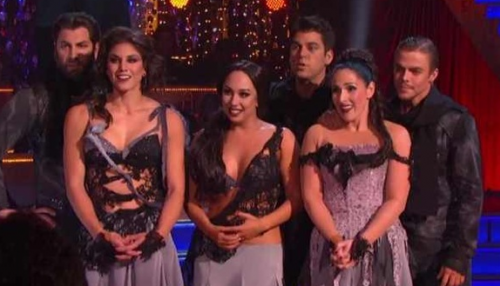 Last night was the seven night of dances on this season of Dancing With The Stars.  It was Halloween of course, so the night was a little more “fun” than usual.  I admit, I was out roaming the neighborhood, getting my trick or treating on, and also handling my front door that had a never ending stream of ghouls and goblins… I live in a very “popular” area… so, I had to watch DWTS on my DVR late… after I’d washed off the make up and crawled into my sweats.

The stars brought the creep and humor into their dances and I was actually very entertained.  Wasn’t too sure how I’d feel, but yeah, I liked it a lot.

David Arquette started the night with a very impressive Cha Cha Cha.  The judges ate it up and yeah, I loved it.  He’s gotten so much better each week.  His entertainment value has always been there of course, but his dancing skills are really getting good!  Scores: 8, 8, 8 = 24

J.R. Martinez remains my favorite of the season and I really don’t think that could possibly change.  I love his energy teamed with his dancing skills, he is unstoppable!  He and Karina rocked a tango to the Ghostbusters theme and is was fantabulous! Scores: 9, 8, 8 = 25

Nancy Grace… oh Nancy Grace.  She’s cute, sweet and has been any unexpected surprise, but, she’s still stiff looking ot me an dI just wish she’d loosen up a bit.  Her jive was lacking a lot.  But she had fun… it was about the fun, right?  Scores: 7, 7, 7 = 21

Rob Kardashian came out on the dance floor in the midst of the very loud buzz about his sister, Kim Kardashian’s divorce announcement and he rocked the tango with Cheryl!  I was so impressed by his improvement, ability to concentrate, and his huge attitude change that is really starting to prove itself.  The judges loved it too!  Scores: 9, 8, 8 = 25

Ricki Lake came onto the dance floor with a highlight reel on her injury.  I was quite impressed… you could not tell she had any issues on the dance floor.  I so respect that.  She and Derek owned the dance floor and came out with the best scores of the night yet again.  You see, Ricki pushed through the pain and looked amazing.  When Chaz was “injured” he used it as an excuse to suck.  Ricki rocks!  Scores: 9, 9, 9 = 27

Hope Solo and that big ‘ole chip on her shoulder appeared on the dance floor once again for a samba that was so-so.  I was yet again not impressed.  Hope is stiff and her attitude turns me off week after week.  I am quite accustomed to Maks having a bad attitude, but I am not used to his partner mirroring it.  Boo.  Scores: 8, 8 , 8 = 24

My favorite part of the night were the group dances.  The first group included J.R. Martinez, David Arquette and Nancy Grace… they were Team Tango.  I had high hopes for them, mostly because I adore J.R., but they really didn’t thrill me.  The judges gave them a total of 23 points.

Next was Team Paso, which included Ricki Lake, Rob Kardashian and Hope Solo and then OWNED it.  I was soooo impressed by their professional appearance.  They were spot on!  The judges gave them a total of 25 points.  These scores are combined with their individual totals.

Tonight someone else is going home.  Who’s it going to be?  I’d say it’s Hope or Nancy.