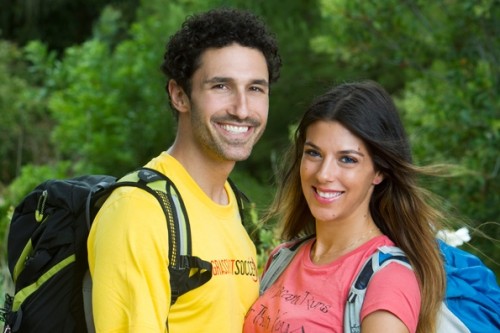 Survivor champ and true inspiration, Ethan Zohn (37) had reached 20 months of remission after battling Hodgkin’s lymphoma, but on September 14th, he discovered he’s now having a relapse.

He spoke with People about his new battle,

“I don’t want fear or cancer to define me, but it’s always in the back of your mind.  It’s localized in my lung area.  But it’s good that it’s not all over my body.”

Ethan has begun a new form of chemotherapy that only targets the cancerous cells, so he’s not going to lose his hair this time around.  His girlfriend, Jenna Morasca (8 years) is standing by his side, fighting it with him.  Ethan has great hope and he’s not slowing down.  He’s even going to run in a marathon!

After the chemo is done, he’s planning on another stem cell transplant from one of his brothers.

It’s so heartbreaking to see him have to go down this path again.  It’s always so hard to see the “good guys” get beat down like this.  Watching him and Jenna on the Amazing Race this season was great.  I was truly bummed when they were eliminated so early.  They are such an inspiring couple to watch.

Keep up the good fight Ethan!  We are behind you all the way!