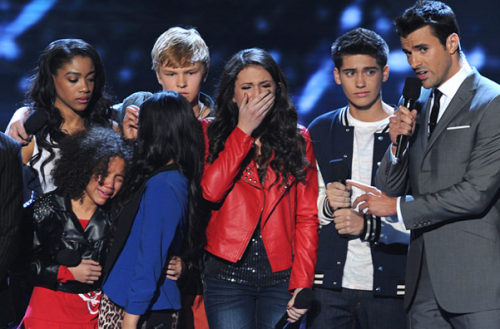 Tonight is the first “fatality” on X Factor at the hands of the viewers.  Last night was the first LIVE performance that the fans got to vote on and the performances were great!  If you missed out, you can check out the recap HERE.

Who is going to be the first down that “walk of shame?”  Your guess is as good as mine, but I’ll give you mine… I am thinking that InTENsity or Leroy Bell could be in jeopardy.  If I could choose, I’d send home Astro.  It’s all the same with him, and I am bored.

I am anxious and excited to see the show tonight.

Keep refreshing the page and we will have the results for you as soon as they are announced along with all the highlights!

UPDATE:  It was quite a night on The X Factor.  There were group opening acts that were clearly lip synced, but that is not unusual…. American Idol does the same.  They are simply saving the contestants for their competitive performances.  Anyhow, the way the voting goes… fans votes decide on the bottom two.  Tonight it was The Stereo Hogzz and InTENsity.  They each were given a chance to sing their “survival song”, then the judges vote on who to keep.  Simon was the only one to vote for InTENsity to stay.  So they were the first elimination of the top 12.   Sad to see their disappointment, but like I stated before the show, I knew it was coming.  Kind of like there were too many of them to actually get attached to the “group”, you know what I mean.

Overall, it was a good night.  I am anxious to see what next week brings… don’t forget to vote!

Best of luck to all of them!