Avril Lavigne Gets in Cat Fight, Brody Jenner Gets Bottle to the Head 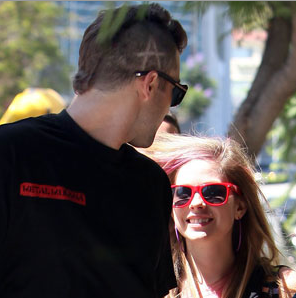 Avril Lavigne is a scrappy little thing now isn’t she?  Well, last night she and he hot guy, Brody Jenner were out at the Hollywood Roosevelt Hotel in Los Angeles when she got herself into a cat fight and Brody tried to break it up.  Well, he ended up getting a booze bottle to the head and the cops had to be called.  Avril split and left Brody there to deal with the problem.  How sweet.  Although, Brody being involved is more “normal” than for a rock star like Avril to have to put herself out there.

Anyhow, Brody was of course not in trouble.  He was the victim of assault with a deadly weapon.  When the cops were done interviewing him, he went to the hospital on his own to have his head checked out.  He’s a-okay.

Hopefully Avril met up with him there though… I am sure she’s nursing him back to “good health.”