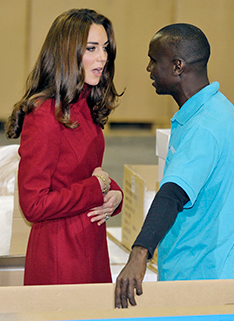 Here is the latest bit in the rumors about whether Kate Middleton is pregnant or not.  While at the UNICEF center in Denmark, Kate refused the peanut paste and then later on was photographed holding and caressing her belly.  That is not normal behavior for someone without a bun in the oven.  And according to the bystanders, this wasn’t the only moment that was captured of her rubbing her “bump.”

One witness told the Daily Mail,

“It was very odd.  Kate would not stop touching her tummy –it was very noticeable. She continually patted it and held her hands against it. She must have been doing it without realizing, and at one point she had both her hands cradling her stomach.”

So no peanut paste, no champagne, and now this baby bump rubbing?  I’d say this is the strongest evidence thus far.  What do you guys think?