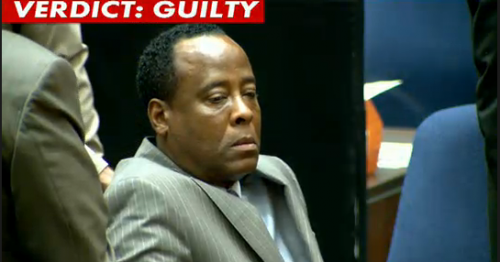 Rumors have been going around that after Dr. Conrad Murray was convicted of involuntary manslaughter and taken into custody, he was put on suicide watch. Well, it’s not true.  According to the authorities looking after Murray, he’s been placed in the medical ward so that the guards can keep a better eye on him.  It is a matter of safety for Murray.  Think about how many inmates are fans of Michael Jackson…. they would love to take out Murray.  Knowing that after he gets out of jail on November 29th to be sentenced, he is most likely going to be put on a whopping 2 year house arrest sentence…well, that’s not sitting well with the MJ supporters.

Murray doesn’t want to end his life.  3 weeks behind bars is nothing and he knows it.  He’s just biding his time in there with all kinds of protection.  He will be out soon, home with his family celebrating the holidays and the Jackson family will be searching for closure, still.