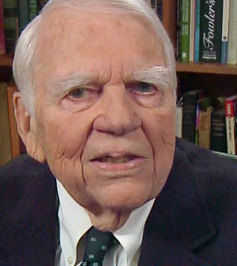 Oh my word.  What a horrible report coming from TMZ just now. There was a luncheon today as part of the memorial for 60 Minutes’ star, Andy Rooney’s memorial service  at the Century Club in New York City.  His college roommate, Bob Ruthman was there (in a wheelchair) and when he went to use the bathroom, he had a heart attack.  He died there when the medics were unable to revive him.

UPDATE! Ruthman didn’t die!  Rooney’s son, Brian was the one to accidentally give the false information. The medics were actually able to revive him and Ruthman is now in a New York hospital in ICU.

Thank goodness!  Our thoughts are with him!