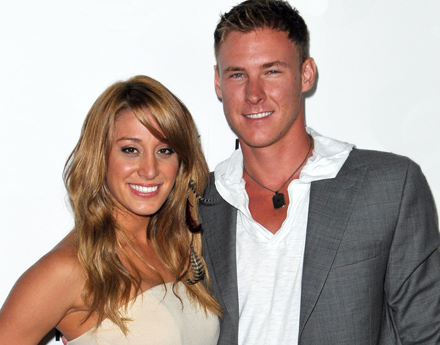 Oh no!  Say it isn’t so!  Um yeah.  Like we didn’t see this one coming from a mile away after that crazy season of Bachelor Pad 2.  Vienna Girardi and Kasey Kahl were the biggest, televised train wreck of a “relationship” ever.  It was uncomfortable for the entire cast as well as for us viewers at home.   The fact they didn’t end their relationship on the show or at least soon after was shocking.  Then we were further surprised when they moved into a new place in Los Angeles together.

Vienna Girardi Gets A Nose Job (Before & After Photos)

These two tried to force a relationship to work that never should have started in the first place.

SO now, it’s finally over.  Kasey Kahl is all busted up inside.  He thought he was going to marry Vienna.  Total fail there.  Like she’s ready  to settle down!  She loves her attention and drama.  Weddings do not fit into that lifestyle, Kasey! So he’s moved in with his parents and Vienna high tailed it back to Florida.

We can hope and pray that there will never, ever be a reconciliation.  Please!