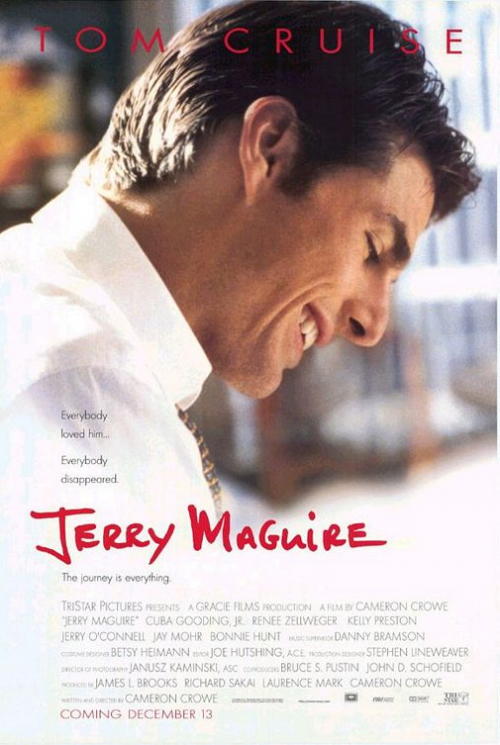 “Jerry Maguire” is in my pantheon of great movies. It’s got a little bit of everything: Tom Cruise at his least weird, a romantic story cleverly wrapped up in a hidden sports movie shell, an adorable child actor, made-up words like “kwan” and a catchphrase that I’d be ok not ever hearing again. Cameron Crowe hit for the cycle on this movie and it’s one that I find myself watching again and again whenever they show it on TBS, which is about every three days.

It holds up so well when you watch it that it seems like it was just made yesterday. So imagine my surprise when I discovered that it’s actually been 15 years since this movie came out (!) Well, if I’m 15 years older, what has that adorable kid been up to? What about Cush? Here are some of the updates from the actors that I care about in this movie:

Jerry Maguire – Tom Cruise
Jerry Maguire was one of Tom Cruise’s most human movies. As in, he actually seemed like a real person in this movie. And he seemed to have real feelings for Renee Zellwegger and her weird face. If you’ve ever seen this man interviewed, that is not an easy thing to do. He’ll be appearing in “Mission Impossible 4: Ghost Protocol” this fall and still trying to make the world think his marriage to Katie Holmes is real. Good luck there, Tom. We all know that a secret Scientologist ninja team (most likely led by John Travolta and Jada Pinkett-Smith) took out the real Katie Holmes and replaced her with some mute, look-alike that goes clothes shopping all day for your jointly created animatronic child.

Rod Tidwell – Cuba Gooding, Jr
Man I miss Cuba Gooding, Jr. This was his finest work and his last real movie as a working actor. It’s too bad that he’s dead now. What? He’s not dead, you say? Well after a healthy diet of “Snow Dogs,” “Cruise Ship” and other cinematic abominations, he’s essentially dead to me. Safely the biggest waste of an Academy Award since Mira Sorvino, Gooding has basically squandered his acting career. If you can look at his IMDB page and recognize any of the movies that he’s made since the year 2000, I will give you his Academy Award. R.I.P. Cuba. I’ll tell Vegas to start reserving space now for your one-man show, “I used to be Rod Tidwell, a.k.a. the best of times.”

Dorothy Boyd – Renee Zellweger
I never understood how Jerry could be so into Dorothy. With her tiny little eyes, big ‘90s sweaters, and adorable off-spring with huge glasses, I’m not sure why Jerry just didn’t run the other way as fast as he could. And maybe that was the point. What’s Renee up to now? Well her life seems to be pretty similar to her life in this movie. She has dated (and sometimes married) a murderer’s row of Hollywood and entertainment types (The White Stripes Jack White, Kenny Chesney, Bradley effing Cooper for crying out loud! For over a year!) She most likely wears big sweaters at home and has not been active on the acting front for a couple of years. Last appearing in the horrible “New in Town,” she’s been pushing to do a third “Bridget Jones” movie, for like, ever. And why not? She’s only lovable when she’s speaking with an English accent. Kind of like Prince Harry.

Ray Boyd – Jonathan Lipnicki
It’s got to be tough being Jonny Lipnicki. When your career peaks at the age of 5 as the most adorable be-spectacled child named “Ray” pretty much ever, you really have nowhere to go but down. Sure he was in “Stuart Little 2” playing the part of “adorable 7-year old be-spectacled boy”, but the rest of his acting career has consisted of “Touched by an Angel” episodes and being made fun of on “Family Guy.” Oh, and apparently he also decided to graduate from high school. Good for him. Now that he’s 21, he says that he spends most of his time lifting weights, working out and is available for acting jobs. And he pretty much announced this on “The View.” I don’t think any more acting jobs are really going to come rolling your way, Jonny, if you choose to announce stuff like that on “The View.” Definitely not a big forum for the “next big thing.”

Avery Bishop – Kelly Preston
I’m pretty sure that Kelly Preston was not acting in this movie. She was just too perfectly bitchy in her small role to really be acting. For fun, I like to imagine her and Travolta at home sitting on the couch deciding what to watch on TV. And I’m pretty sure he never gets to pick. Or dress himself. Or fly his airplanes when she says that it’s not ok. She kind of scares me. However, in some good news, after the unexpected death of her son Jett, the Travolta’s finally succeeded in replacing him with a newer model, Benjamin Travolta almost a year ago. A word of advice, Benny, don’t make Mommy angry. Just ask Daddy. He’ll tell you. She also appeared as the hot MILF in Maroon 5’s “She Will be Loved” music video. Playing, a rich bitch that totally makes out with Adam Levine and leaves her abusive sugar daddy. I hear you crying out for help, Kelly. When I saw this video, I knew it was like your life with Travolta. You can still get out. It’s not too late.

Frank Cushman – Jerry O’Connell
Married to Rebecca Romjin. Of the most ridiculous things in the world, this one wins.

To commemorate the anniversary of “Jerry Maguire” you should dig it out again and give it a watch. Or, wait 20 minutes for it to appear on TBS. Lipnicki is available to watch it with you.

Brooke Niemeyer is an entertainment junkie and a regular contributor for Celebutaunt. You can follow her on Twitter @RNYBrooke