CONFIRMED: Dr. Conrad Murray On Suicide Watch – He’s “Lost His Will To Live” 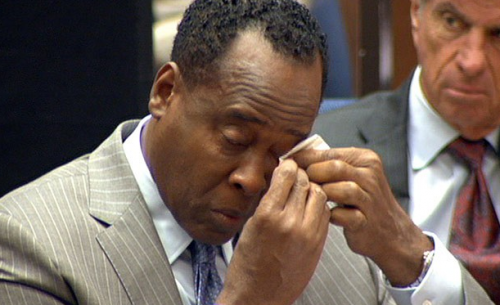 I am actually a bit surprised by this.  Why?  Because, Dr. Conrad Murray was convicted of involuntary manslaughter in the death of Michael Jackson, but the sentence he is facing is nothing.  Seriously nothing.  Sure.  He’s losing his medical license forever.  But that’s the worst of it.  He will most likely only serve two years on house arrest.  That’s it.  He won’t serve a day in prison, and likely zero time in a county jail either.

So what’s the deal?  What has he been talking suicide to every one of his visitors?  He’s been in the medical ward of the jail since he arrived there and he’s not going to be leaving there until he is sentenced on November 29th.

Of course the jail can’t confirm anything because they aren’t allowed to.  But everyone close to Murray is saying he’s on the verge of suicide.