Kris Humphries Signing The Divorce Papers, Moving On With HIS Life 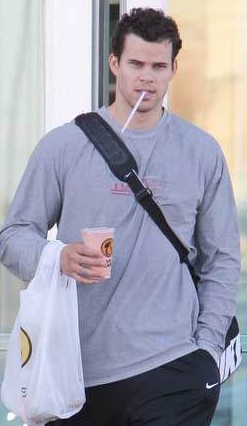 Kim Kardashian and Kris Humphries have always been from two different worlds and none of that has changed in the wake of the scandalous split.  Why scandalous?  Well, there have been oh so many rumors about the wedding being faked, staged, never genuine.  Well, Kim has been fighting like mad to prove to the world that she truly did marry for love.  She’s sort of tried to stay out of the spotlight… nah… not really.  But on the other hand, Kris has been hiding out, staying home in Minnesota…. till this week.  He’s now been spotted in New York City on business and out eating with friends.

Some of the fresh rumors were saying that he and Kim were going to have an epic battle in court over the divorce proceedings and that Kris had hired a new legal team.  Well that was all total BS and nothing has changed.  This is going to be a very simple split.  The media frenzy has been messy, but that’s the only unkempt part.  Their 30-page prenup will make this a very cut and dry divorce.

Kris is ready to sign the papers with no fuss involved.  I feel bad for him.  It’s going to tak e along time to recover in the dating world after this circus he just went through.