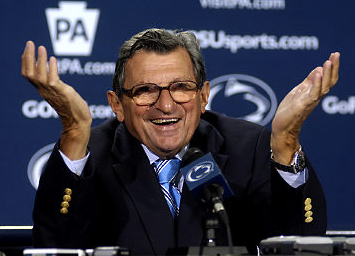 Go ahead.  I know I am going to get a ton of heat for the headline on this story.  I don’t care.  Former Penn State head coach Joe Paterno has been diagnosed with lung cancer.  It’s treatable.  But let’s face it, he’s 84-years-old and well…. his clock is almost done  ticking.

How is one supposed to have compassion on a guy who allowed children to be raped?  Yeah…. Can’t answer that one.  I call this karma.

Paterno’s son, Scott Paterno made the announcement to the AP,

“Last weekend, my father was diagnosed with a treatable form of lung cancer during a follow-up visit for a bronchial illness.  As everyone can appreciate, this is a deeply personal matter for my parents, and we simply ask that his privacy be respected as he proceeds with treatment.”

I am sorry, but Joe Paterno won’t be having any matter be left alone or private.  Even after he passes.  His name will forever haunt Penn State, the victims, and their families.