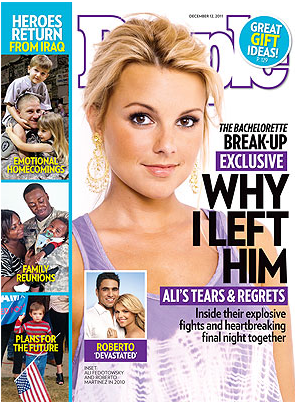 Everyone seemed to think that Bachelorette star, Ali Fedotowsky and her “winner” Roberto Martinez were one of the very few couples that would last after the show wrapped.  But alas, it didn’t.  They might have looked like sunshine and happiness publicly, but behind the closed doors, they were getting more and more miserable.  So that 18-month-long engagement drug out and eventually came to an end.  It wasn’t a shock to either of the though.  It was in the works for quite some time.

“I wouldn’t be being truthful if I said this came out of nowhere.  We definitely had been having problems. But I had always believed that we could work it out.  We both realized we were unhappy more than we were happy,” says Ali. “And we both deserved more”

You can read the full article when you grab a copy of People on stands now.

Are you guys surprised that they didn’t make it?  Who do you think was more at fault for the fail?  Was it equal?  Drop your thoughts in the comments below.