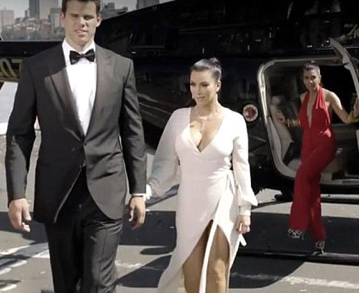 This somehow wouldn’t surprise me.  Kim Kardashian is famous because of her sex tape past.  And it looks like there might be a sex tape future IF any of these crazy rumors are true.  And something is telling me that they are.

Kim and her husband, Kris Hupmhries allegedly made a few sex tapes during their quickie marriage.  And now their divorce/annulment is getting really ugly, so will those tapes come into play?  If Kim has them, will she “leak” them and make another killing off of them?  Or if Kris has them, will he use them as ammo against Kim in this all out raging war that is becoming their daily lives?

I am dying to know if the sex tapes even exist.  Why would you be making those after what has happened in that past?  Oh yeah, because that’s how you got famous in the first place.  And if this marriage is as much of a sham as even Kris says it was, then maybe Kim did want these sex tapes for some extra cash and attention down the road.

Who knows?!  What do you guys think?  Do Kim Kardashian and Kris Humphries sex tapes exist?