Kourtney Kardashian Confirms Baby No. 2 Is On The Way! 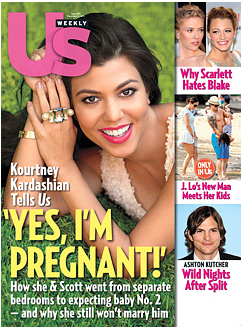 Hmmmm.  This is interesting.  Kourtney Kardashian just announced the big news to Us Weekly.  She is having another baby with Scott Disick.  Why is it interesting?  Well, after watching the first episode of Kourtney and Kim Take New York, I got the feeling that she and Scott were about ready to call it quits completely.  They don’t get along.  Everything he does makes her mad (I don’t blame her) and they don’t even sleep in the same room!  Scott wanted to marry Kourt in the past, she turned him down.  But she wants more babies with him?

Some people seem to think that she just wants matching babies and is willing to “be with him” for that part, but there is no love left between them?

I don’t know what to think.  Kourt seems very unhappy with Scott, but very content to keep things the way they are.

I also can’t help but think of Khloe in all of this.  She wants to have a baby with her husband, Lamar Odom so badly and it’s not happening.  It has to hurt to have your sister get number two already and you can’t even get one.

Kourtney says that she’s already 9 weeks along and that she felt safe not waiting till 12 weeks to announce the new baby.  She’s very connected with her body….. I am sure it’s fine.

So… with all that said, congrats to the “happy” couple!  Hopefully they will get a girl this time!  Just what that family needs!  More girls!