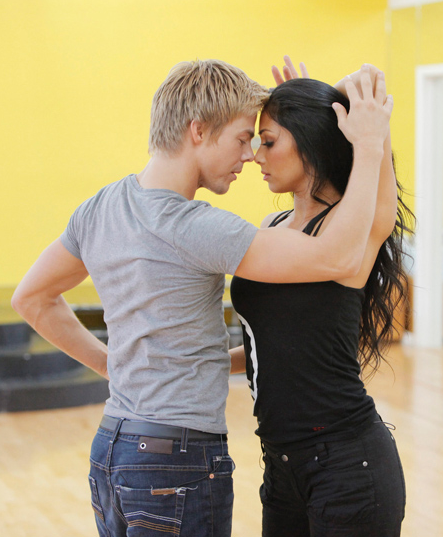 Lauren who?  Yeah, Derek Hough didn’t waste any time moving on from Lauren Conrad.  He has gotten off to a hot start with his former dancing partner, Nicole Scherzinger.  They won season 10 of Dancing With The Stars.  Now they are taking their relationship to a whole new level.

“Ever since Nicole broke up with [race-car driver Lewis Hamilton], she’s been hanging out with Derek.  He 100 percent acts like he’s her boyfriend.”

They new couple has been spotted out and about, attached at the hip, very lovey dovey.

So what do you guys think?  Do they make a cute couple?  We have seen chemistry on the dance floor between them, why not in real life, right?

All I have hanging me up is Nicole and her behavior on The X Factor.  She’s really starting to get on my nerves, making me hope the rumors about her being replaced next season come true.  Are you guys feeling the same way?