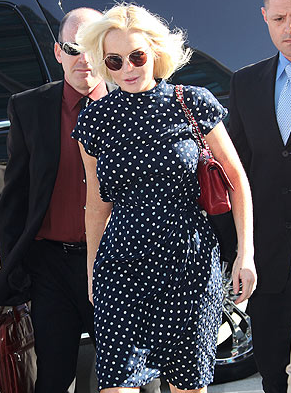 Lindsay Lohan is getting ready for the next big thing in her floundering career.  Well, first she’s going to appear in the next issue of Playboy in her nude spread, then she’s attempting to leave the country to shoot Celebrity Big Brother (UK).  Can it happen?  Well, the Daily Mail reports that the producers are already shooting her background footage for the show and have had all the meetings with her.  The only hold up will be the law.  Yeah, Lilo’s little probation issue could make this all for nothing.

The producers of the show say,

“Lindsay would be an absolutely amazing signing for us.  She’s a fiery character too, so there are sure to be a some major clashes with other celebrities if we get her in the house.”

I agree!  She would be great there!  But… yeah, the whole Judge Sautner issue….

“We hope that the courts will make a special allowance in this case. There aren’t many more controlled ­ environments than the Big Brother house.”

It’s true.  The judge would have more access to every move Lindsay makes if she was allowed to shoot the show.  What kind of trouble could she get into?  It’s almost like she’d be in jail!  Under surveillance 24/7!  Hmmmm, do you think she will get to go?

If her probation officer gives her the permission to go, Lindsay could be out of the country starting in January….