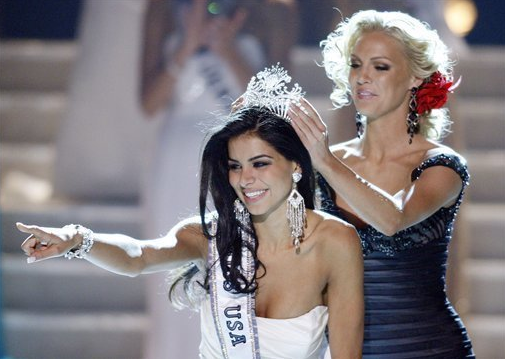 Well, lets makes that former Miss USA.  Rima Fakih was arrested in Highland Park on Saturday morning for drunk driving.  Her lawyer, Doraid Elder has confirmed that she did in fact get a DUI even though she went to Twitter, claiming she was innocent and was never even in Michigan.  Yeah, major fail girl.  She blew a .20 which is more than twice the legal limit.  Yep, she was wasted.

He told The Detroit Free Press,

“Elder repeatedly referred to the charge as ‘allegations,’ but also said ‘this shouldn’t be something that defines who she is,’ adding it was ‘poor judgment’ on her part.”

In 2010, the 26-year-old Dearborn native won the Miss USA Pageant, becoming the first Miss Michigan to win since 1993 and the first Arab American to win the pageant.

This isn’t exactly out of her nature either.  Fakih has been having issues ever since she won the Miss USA title in 2010.  beefs with the pageant officials, WWE Tough Enough embarrassments, and even caught on camera pole dancing.  Let’s face it, she’s a bad girl!  Not the best to represent Miss USA, but that seems to be the story for most of the crazy girls!